Da Gema's directing style is modern, artistic and sometimes provocative. She likes to question the audience by raising disturbing issues in alternative ways and by revealing new point of views by the use of strong lights, images and videos. For da Gema, directing is not about expressing what a text wants to say, but what a text can say. One of her masters is German director Christoph Schlingensief. 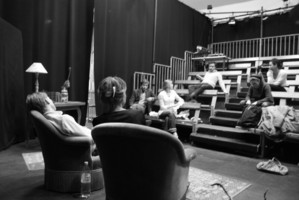 Da Gema directed several plays, among which 3 plays she wrote herself:

She has also directed different sketches and teasers related to this play.