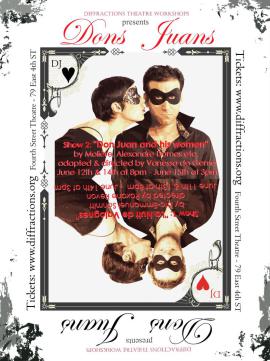 Written by Vanessa da Gema in 2014, and based on the works on Don Juan of France's most famous authors (Molière, Alexandre Dumas, Edmond Rostand, Albert Camus, Guillaume Apollinaire, Eric-Emmanuel Schmitt and Roger Vadim), this play  unites for the first time the different adventures of several Dons Juans imagined in French literature.

Performed by Diffractions Theatre workshops for its Premiere at the House of Oops, an artists' residency in Brooklyn, and then for three  representations during June 2014 at the 4th Street Theatre in New York.

Story: Don Juan's love affair with three women from his childhood to his middle age is narrated by a housemaid through three different centuries which reflect women's evolution through time.