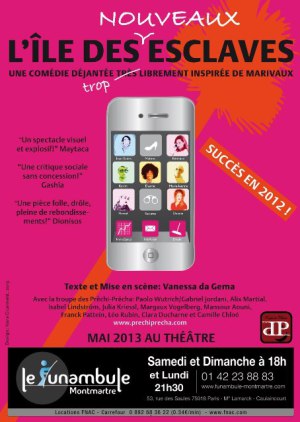 Written by Vanessa da Gema in 2011 for the Theatre Company Prêchi-Prêcha., this political satire is inspired by the idea of inversion of social roles imagined by Marivaux in "L'Île des Esclaves".

Performed by the Company Prêchi-Prêcha for three years in several cities in France: 5 showrooms at the Théâtre de la Reine Blanche in 2012 and 18 public representations at the Funambule Montmartre in May 2013, 20 representations outside of Paris.

Story: An unusual foreign President is surprisingly elected in France and decides to change the law so as to force the upper class to replace more modest people at work. The new work experiences of a marketing director, banker and engineer are observed by a mysterious homeless women who can't wait to take the power...

Read Press Review of the play